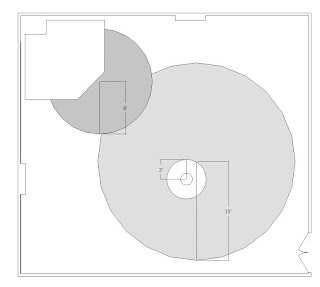 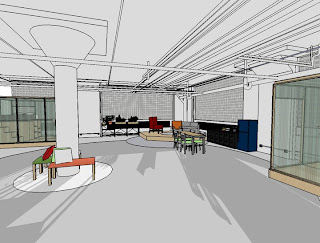 Here's the plan for the new paint job. Oil based this time, will be fumey but a helluva lot more durable. My friend Tilman recommended an equal surface are for the big circle and remaining white, a proposition made possible by the awesome SketchUp! 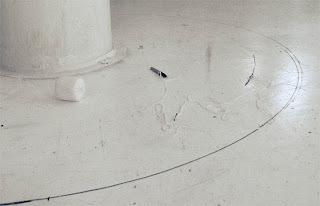 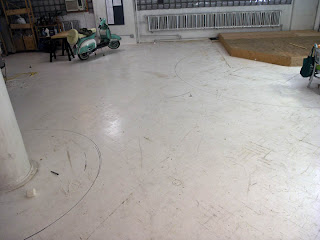 I premarked the circles the old fashioned way, a nail, some string, and a sharpie! There will be a small circle around the column around the benches, a medium circle accentuating the stage and a large one off center in the middle. 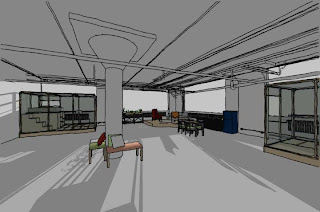 Softbox will be a part of the openhousenewyork/Flux Factory partnership and show the first weekend of October. It is called Living Room and curated by Chen Tamir (also one of the curators of a show I was in there last year
NYNYNY: So Nice We Named it Thrice). I originally proposed to do a site specific intervention with a host site participating in OHNY, but in the end, and thankfully to Chen's suggestions, I'm going to "debut' Softbox instead.


Flux Factory has invited ten artists to transform strangers’ homes into sites for interactive works. Domestic or historic locations throughout New York City will become arenas for exploring what it means to inhabit a space, to make it one’s own. In conjunction with openhousenewyork, “Living Room” locations range from private living rooms to historical sites throughout Manhattan, Brooklyn, and Queens.

Explore a wall of secrets, a room-cum-optical-device, and rooftop camping, among other exciting projects!

“Living Room” is a continuation of Flux Factory’s interest in the urban experience, in New York history, and in the overlap between private and public space. Being a live/work collective, we are fascinated by what it means to make a space one’s own. Aside from satisfying a mild desire for voyeurism common to us all, this project is an opportunity for the public to peek into private sites normally off limits.

This special exhibition is one of the many itinerant projects Flux Factory is mounting in the face of immanent eviction from our Queens premises.

Works will be on view throughout the OHNY Weekend on October 4-5, 2008 from 11:00 – 6:00 unless otherwise noted. A free, 20 person shuttle will leave the Center for Architecture on Saturday and Sunday at 12pm to transport visitors to the sites. To RSVP for the shuttle bus, and for detailed information, please visit fluxfactory.org.

“Living Room” is made possible with public funds from the New York State Council on the Arts, New York City Department of Cultural Affairs, and Queens Council on the Arts, as well as generous support from the Andy Warhol Foundation for the Visual Arts,
and Carnegie Corporation of New York.
Newer Posts Older Posts Home
Subscribe to: Posts (Atom)
Softbox is a completely malleable space where rooms are on wheels and entire environments can be changed around. The flexibility of this live/work warehouse space is due to its role as a testing ground for sculptural and interior architecture projects by myself and visiting artists. Focused on “hosting,” Softbox is both a laboratory and a social space where interactive programming takes place including short term residencies, exhibitions, screenings and performances.