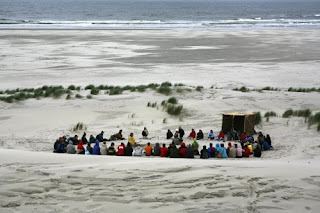 Performance from Oracle, by Lidy Six. This was a gathering led by a shaman on the dutch island Terschelling.

Lidy was the first guest to Softbox (see post "New Guest: Lidy Six"). This is part of an email from her about her thoughts about the space and her own work.

"...First things that crossed my mind:
Your space relates a lot to my work of the last years, specifically my series ‘Oracles’ in seven parts. In several parts the whole space was white with the audience on white cushions. In part 3 I had a dream interpreter as guest. I was laying down in bed with her, in a large bed for two persons in the middle of the space, the audience around on cushions. For one and a half month every morning I wrote down my dreams of the night. During the performance I told her some of that dreams and she worked with me and the dreams, it was a journey into a dream world with the audience involved. Everything was white, also the bed and sheets and her and my nightclothes, white because of the dream world, it has something diffused, volatile, another dimension. The light had an important role too.And in part 7 we asked also the audience to come in white. That part was about the power of sound and color, I showed you some images on DVD. Here we traveled through seven colors via light and sound. With this part I was very busy during my stay in NY. Last Friday I had a meeting with a new lighting designer for developing further ‘Oracles#7’. I told her about my stay in NY and about your space too (I couldn’t show photo’s, will do that later). She said that she could imagine that it would be nice to work with light in your space for some days, to explore things, also with your rooms on wheels. She is a very good lighting designer, is also writing about light, for example a very good article about the work of James Turrell and Olafur Eliasson.

After leaving and thinking of your space for example the idea fell in that it could be nice to sit a whole day in your space, on white cushions, without talking, in silence and experience the light, all the transitions in light during the day. Starting in the dark in the morning up until the darkness in the evening, from before dawn till after sunset. Writing this now, I become consciousness that it has to do with the sky-scape of Turrell in PS1. I could imagine to do this on a clear winterday, I think that gives beautiful light. And invite people, ‘audience’ for this experience. I remember that you told me that during the day there are sometimes different colors in the space. I would love to experience that..."
Newer Post Older Post Home
Softbox is a completely malleable space where rooms are on wheels and entire environments can be changed around. The flexibility of this live/work warehouse space is due to its role as a testing ground for sculptural and interior architecture projects by myself and visiting artists. Focused on “hosting,” Softbox is both a laboratory and a social space where interactive programming takes place including short term residencies, exhibitions, screenings and performances.